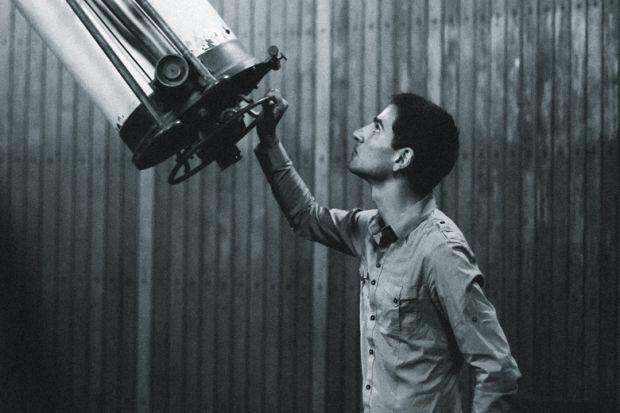 David Sobral is an astrophysicist who, while at the University of Lisbon, led a team of astronomers who discovered a galaxy that may be home to the first generation of stars made after the Big Bang. In January, he joined Lancaster University as a lecturer in astrophysics.

Where and when were you born?
I was born in Barreiro in Portugal on 11 February 1986. I did spend some really important time in the southwest of Portugal, on the Alentejo coast.

How has this shaped you?
Unless I could talk with a version of myself in a parallel universe where I wasn’t born there, it is obviously very hard to clearly identify how this has shaped me. However, I was lucky to have had fantastic parents, sister, teachers and a truly nurturing environment. Without them I certainly would not be the same person at all.

What drew you to the position at Lancaster?
It’s an absolutely outstanding opportunity to be able to contribute and be part of a new group focused on observational astrophysics, within a top physics department. I was truly fed up with the complete lack of strategy, dynamics and ambition at the University of Lisbon; nothing really works well, but people just seem to ignore all the problems as they prefer not to change. Lancaster is completely the opposite, so it’s extremely easy to feel at home.

You led the team that discovered the CR7 galaxy, traces of the first generation of stars that gave life to our universe. Can you explain the feelings you had when you first glimpsed it through the telescope and realised what it was?
We didn’t quite glimpse it through the telescope directly, but there were a few very exciting moments. It was actually just after Christmas (in 2014) that we could get a first confirmation with the Keck telescope in Hawaii. While for normal, very distant galaxies, one needs to observe them for hours and even then do a lot of data processing to see anything, for CR7 it was so clearly there after just a few minutes.

Why did you name the galaxy after footballer Cristiano Ronaldo’s nickname and brand?
We named the galaxy for its GPS coordinates, its location in the sky (the COSMOS field) and its distance to us (which we measure in red shift – and CR7 is at a red shift of about 7). Thus, we called it COSMOS Redshift 7 (CR7). We did not name the galaxy after Ronaldo, although we knew, of course, that those were also the initials that Cristiano Ronaldo uses. Of course, this was great because it allowed the discovery, and many aspects of the astronomy related to it, to reach so many more people than it would otherwise have reached, if the galaxy had some other cryptic name.

Do you think he’d be proud to have a galaxy that shares his name?
It would be great if he understood that while the galaxy is not named after him, it does have some similarities with what the player/professional represents. If anything, the galaxy is a tribute to hard work, never giving up and to finding things that would otherwise be considered impossible.

Do you think Ronaldo’s the best player in the galaxy?
If we are the only species playing what we call football, it obviously makes it much easier.

It’s rare for young academics to have achieved so much in so little time. Do you think about what you have already achieved?
To some extent I can be considered relatively young (I’m 29), but there are so many others who have achieved way, way more in even less time. The most important thing to me is to enjoy what I do and to do it as well as I possibly can. I feel so fortunate to have had the chance to actually go to university (if you go back one to two generations before me in Portugal, I would stand no chance as the inequalities were truly brutal) and to be able to do what I am passionate about.

What advice would you give to your younger self?
I would really worry about the butterfly effects of that one.

What kind of undergraduate were you?
I did my undergraduate degree in Lisbon, but I was commuting every day from the other side of the river Tagus. That turned out to be an awful experience and tremendously tiring. On top of that, I was writing books and I was the president of a national association of young scientists. So, very simply, I guess I was the kind of undergraduate who did not have that much time to study, but also not that much time to sleep. It turned out to be quite good training for long nights [observing galaxies].

What’s your biggest regret?
Worrying too much.

If you were universities minister for a day, what policy would you introduce?
It depends on which country. In the UK, I definitely would not jump into introducing anything unless there was a clear demand for such a measure. The system is mature enough to basically run itself. The worst thing to do is to be changing the system all the time without the back-up of the actual community. However, in Portugal, there really is so much to do. Particularly in improving diversity (along with gender equality at all levels), increasing the number of international students and staff and, more than anything, making sure that the best people get the jobs and the necessary conditions [they need] to become even better.